Our Vehicles » The CT-V Laser Jeep

As our little V group grew here in CT, it struck me that we could do something big and cool, that had never been done before!

I’ve always wanted a Jeep Wrangler (since seeing them on the show in 1984!), so I talked to the gang and asked if I bought one, could we do this? The answer, of course, was a resounding, “YES!”

So, I started looking. We knew finding one the same  year as used on the show would either be too expensive or too much work – and I wanted to be able to drive it around town in the summer.

We settled on a 1990 – it had square headlights, but the correct roll bar, which was more important, aesthetically. It also had a rebuilt engine and both top and door options included. It was also…BRIGHT YELLOW.

We got it home in June of 2011 and I drove it around as it was for little jaunts here and there – what a fun vehicle to drive! We also started our research, taking as many low-resolution screen shots as we could, as there was no other option and this had never been done before – but so much the better!

During the fall of 2011 we started getting parts to start prototyping. It was at that time that one of my best friends was in an jam and needed a vehicle, so I said, “Use the Jeep for now.” It wasn’t returned to us until the Spring of 2014 and we were determined to get it done by ComiCONN of that year. The gang came over and we proceeded to strip it down to the form it needed to be in. We removed the soft top and all connectors, backseat, and the connecting roll bars to the windshield and doors – that’s when we could really see it starting to take shape!

Unfortunately, we still had no answer for painting it white. Body shops wanted a lot of money to do it and I almost gave up the idea that it would ever be done…until Erik L. stepped up and said, let’s get a compressor and I’ll do it myself (since he had some experience painting plane parts when he was a mechanic)! We got everything we needed to paint and he scheduled two days to come down and stay over in order to mask and paint the entire Jeep in our garage.

We spent Day 1 masking and on Day 2, Erik started painting and sent me progress pictures while I was at work. It was happening! Once the initial painting was complete, we did some touch-ups and got the gang over to continue on the cannon itself using more low-resolution screen grabs. We noticed there were two built with subtle differences, so we picked the one we liked more and started building with some large diameter PVC pipe, wood, metal, and other found items. Once we settled on the dimensions, it came together pretty quickly – we were lucky to have the right minds at work as everyone who played a part brought something unique to the project. The way some of the parts were obtained and how perfect they were for the project are funny stories in and of themselves!

By early August, we had done it and rolled it out for our first photo shoot. She was beautiful and represented what this group of people could accomplish. That year, we exhibited at ComiCONN thanks to Erik Yacko – and Rick as well! Since then, we’ve upgraded the grill rims, improved the mount, added electronics, and will continue to make modifications as we see fit.

We want to thank ALL those on Team Jeep – Rick, Erik L., Dave, Stephen, Dayna, Jim, and Karl for helping make this dream a reality. 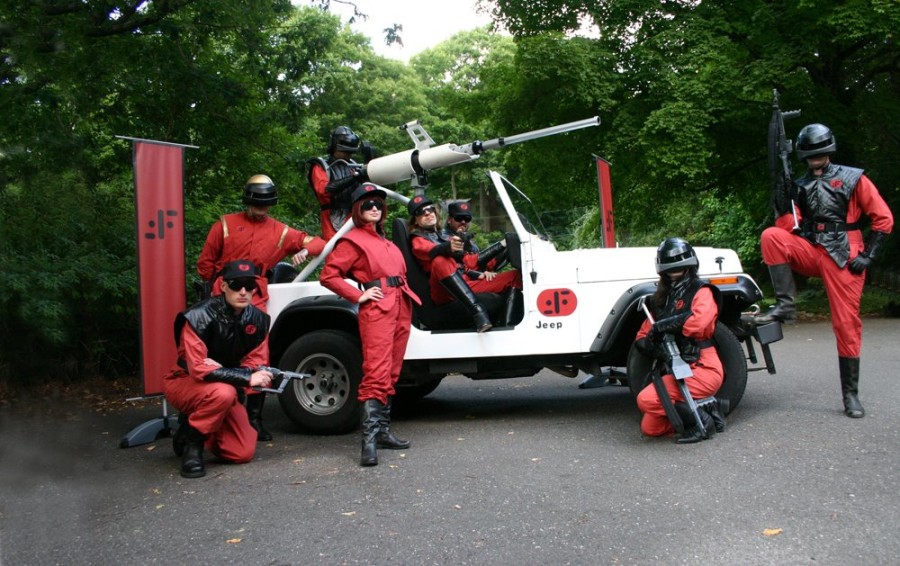