At Spring Chiller 2018, after we met Russ Tamblyn, we were walking by George Chakiris’ table when his handler said, “You know, my husband used to be your commander.” Turns out, it was Heather Prine, wife of Andrew Prine, who played Stephen in the original V! She asked to take our picture, which, of course, we said yes to and told her how we’d actually had possession of one of his costumes.

Then she asked if we’d like to talk to him – and dialed him on the phone! We both got to speak with him and he lamented on the lack of mouse delicacies in Manhattan and asked us to make sure no one ran off with his wife! What an absolutely delightful moment – and thank you, Heather, for making it happen amidst all the chaos of the con!

In the fall of 2021, one of our members brought it to our attention that Andrew would be a guest at a small con in Virginia, The Williamsburg Nostalgia Fest. We really wanted to meet him, so we planned this 16-hour round trip in two days to make it happen! Once we decided we were going, we asked our members if anyone would like his autograph. As one would expect, there was an overwhelming response!

So, armed with our self-made Visitor Fleet-style photographs and our standard gift mug, we set off for the South to a con whose guests are all American Western TV and movie stars and the attendees tended to be on the older side! To say that we felt out of our element was an understatement – but we were going to do it for Andrew Prine.

We had decided in advance to attend a Meet-and-Greet the night we arrived to acclimate ourselves and maybe get to speak to Andrew. After we signed in and went back to our hotel room, we started to reconsider dressing up at all the next day. However, at the Meet-and-Greet, we were welcomed and found a few people that recognized the V on our t-shirts! This included a cosplay guest who had been in his own V uniform earlier that day! Everyone there made us feel so much more comfortable. We didn’t get the opportunity to say much more than a quick hello to Andrew that night, but we knew we’d see him the next day! Everyone we spoke to that night encouraged us to wear our uniforms the next day, and we had come all this way to meet Andrew in uniform, so we had to do it!

The next morning, dressed in full Visitor regalia, we arrived at the con. We ran into a friend who was also there to see Andrew as well as some others, met a woman who ran over to us to tell us how she used to dress as Lydia in a V fan group back in the 80s, and got stopped by a few others on our way to Andrew’s table. All of which made us feel way better about being dressed up!

We had stopped to say hello to some of the people we’d met the night before, when we saw that Andrew had spotted us, and grinning, made the two-finger “I’m watching you” gesture at us. Obviously, we headed straight to his table after that and told him we had many autographs for him to sign, but first wanted to present him with his mug. We said hello to his wife, Heather, who was assisting him and another guest and reminded her of our first meeting. We also had a lovely moment reminiscing about Richard Herd, as Andrew and Heather were very close friends with Richard and his wife.

Upon opening his gift, Andrew was visibly touched and said he absolutely loved it. He proceeded to sign a pile of autographs for Visitor Fleet members from around the world and we took many pictures with him and Heather. As you’ve heard us say before, with all of the V actors we’ve met, he was so friendly and enjoyable to talk with – and such a great sense of humor, too.

We then walked around the show floor and were surprised to find so many people that recognized our uniforms and that had their own stories of their love of the show to tell. Before we left, we ran into Heather and Andrew on their way to lunch and were able to give them hugs and say thank you for being such great people.

It was so totally worth it!

As an addendum, our drive home was gorgeous and scenic, including a clear-blue-sky trip across the Chesapeake Bay Bridge, which put a wonderful bookend on an already great trip. 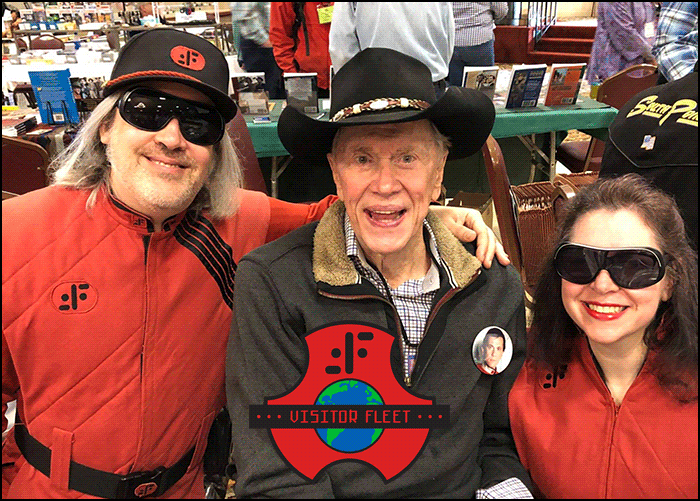 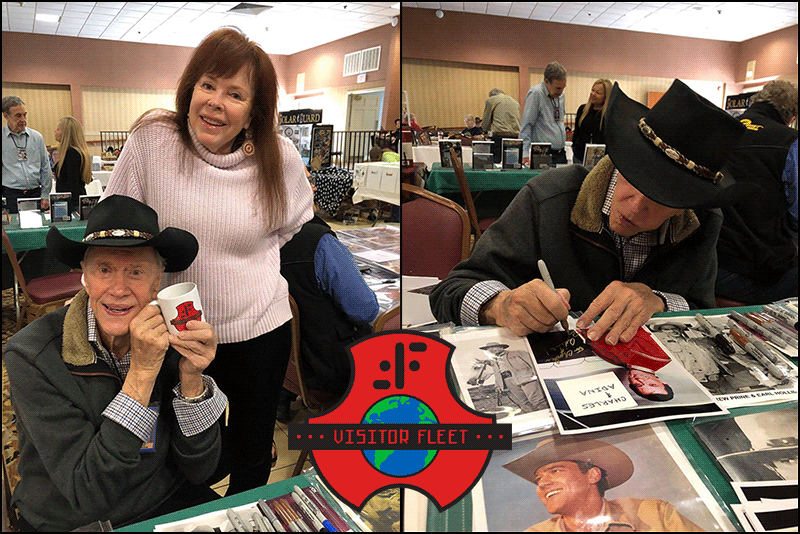