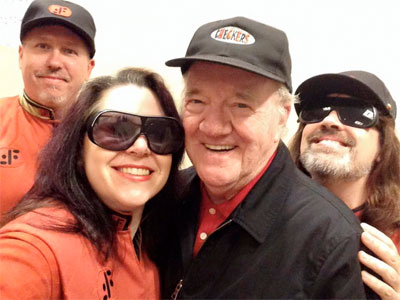 Click here to go to our tribute to Richard.

We first met Richard in 2015 at Chiller Theater in New Jersey and the second he spotted us, he lit up with a huge smile and welcomed us as our Supreme Commander. We presented him with a mug with the CT-V logo and his name in Visitor characters and he loved it! He began to tell us stories right then and there – a precursor to the many stories he’s told us since then from his many years as an actor. We had a fantastic time chatting with him and hoped to see him again.

We even had the pleasure of taking Richard, Frank, and Greta out to dinner that Saturday night – one of our best nights this group has ever put together. We all got the chance to get to know these wonderful people who were part of this show that still means so much to us to this day.

We have also gotten to know about Richard’s other artistic endeavors in painting and sculpture, and we are proud one of his paintings – a self-portrait of him as Supreme Commander John – which hangs proudly in our Shop for all to see and admire.

Since then, we keep in touch regularly.  Richard has truly become a part of our family and we so fortunate to have him in our lives. 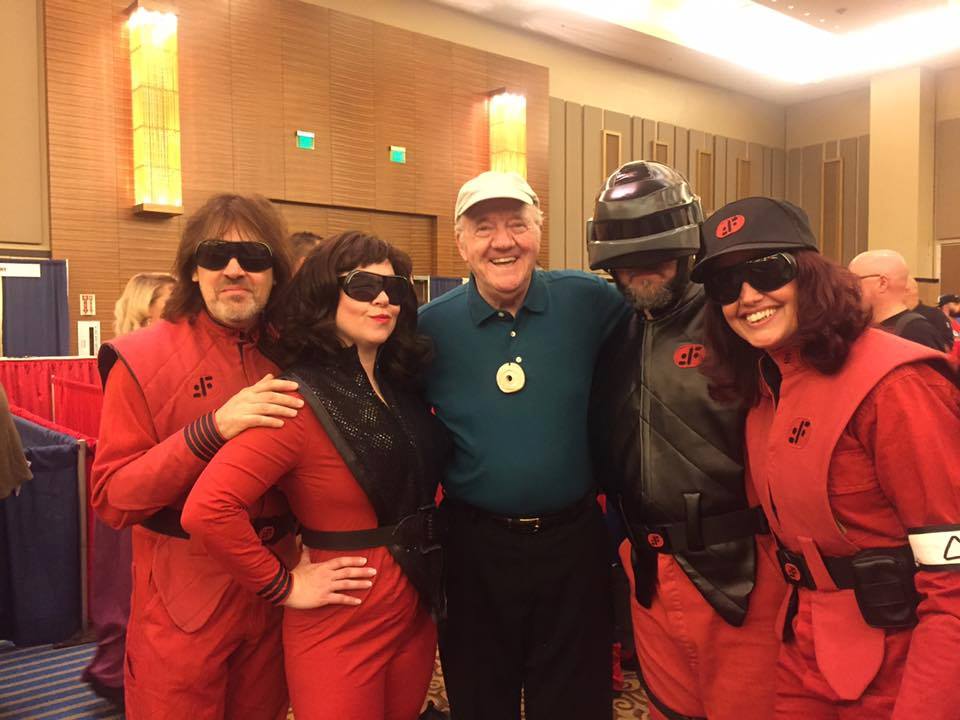 (Originally published on May 26, 2020) Charles and I, along with Erik Larkin, first met Richard in 2015 at Chiller Theater in New Jersey. The second he spotted us in uniform, he lit up with a huge smile and welcomed us as our Supreme Commander. We presented him with a mug with the CT-V logo and his name in Visitor characters and he absolutely loved it! He began to tell us stories right then and there – a precursor to the many stories he’s told us since then from his many years as an actor. We had a fantastic time chatting with him and hoped to see him again.

We even had the pleasure of taking Richard, Frank, and Greta out to dinner that Saturday night which was one of the best nights the CT-V has ever put together. Oh, the stories that Richard told us throughout the dinner – I thought the most wonderful thing was that the stories were not really about him at all – the stories were about those in his life who had made impressions on him or made him laugh. That night was so special to us. The next morning, Richard told us that he was so tired after the con closed on Saturday that he wasn’t sure he was going to attend the dinner – but he was SO glad that he did. We were, too! After that he loved to tell us, “You guys can buy me dinner anytime!”

Richard wasn’t just an accomplished actor – he was a musician, a poet, a sculptor, a writer, and a painter. We are proud to own a self-portrait he painted of himself as Supreme Commander John. It is proudly displayed in The Shop for all to see and admire.

Since then, we’ve kept in touch regularly. I will never forget the first time he called on a lazy Sunday afternoon. I hear my phone ring, and was surprised to see the name “Richard Herd” on my screen. When I answered, he majestically announced: “GREETINGS FROM YOUR SUPREME COMMANDER” and we both started laughing! He was always asking about upcoming conventions because he loved connecting with his fans from all aspects of his acting career! We’d talk about family, art, and whatever we were up to in our lives. Over the years, he would send us notecards, Christmas cards and random gifts – it was always so sweet to have a little surprise hello from him in the mail. 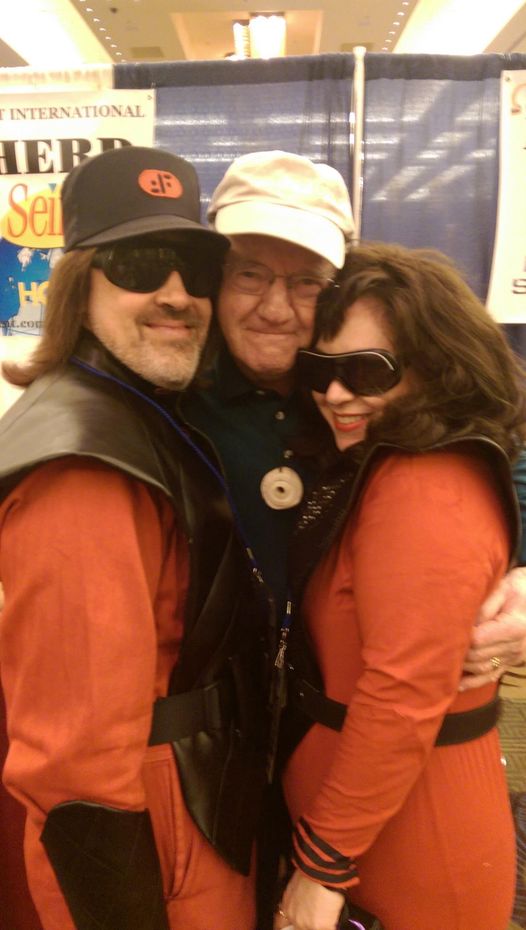 Later, Richard decided he wanted to rework his website so it would look more up-to-date and make it easier to sell his art online. He called us to ask if we knew anyone who could help him with that, and I told him, “actually, that’s what I do for a living!” So, he hired me to redesign his website and that was the beginning of our working relationship on top of our personal one as I rebuilt www.richardherd.com. At the same time, his dear friend Frank Bilotta (owner of Bilotta Gallery that shows many celebrity artists including Richard) had been the admin of Richard’s Facebook Page and I was introduced to him to coordinate the Page with the website. Frank added me as a second admin to give him some backup when he wasn’t able to add content and to also further connect Richard’s fans with his website and vice versa. The fact that Richard entrusted with both of these projects means a lot to me.

Last year, Richard called with bad news…he was fighting cancer. I can’t express how honored we were for him to trust us with this secret – and we swore we wouldn’t reveal it while he was alive. He said that he needed us to know, because he considered Charles and I family. He was optimistic, getting treatments that he felt were doing wonders, and as he’d beaten illness before, he was sure he’d beat this. Unfortunately, that was not to be.

We last spoke to Richard on May 14th, deciding to give him a ring and catch up as we did every month or so. He was not feeling great, but even so, he was hopeful and optimistic to make it to his birthday in September. We asked his wife Pat how her Mother’s Day was, chatted about some idle things, and he soon needed to go to a checkup. Before he hung up he told us three things: “Never forget your Supreme Commander!,” “Be sure and check in on Pat every now and then,” and “I love you both.”

Richard was so much more than an actor we met at a con. “Never forget your Supreme Commander”? How in the world would we ever do that? He was our friend and a member of our family and we already miss him incredibly. – Adina

“I am rarely moved by the passing of a celebrity. I am rarely one who’s emotions are on display, sometimes even to myself. I’m not trying to be “Strong” and lets face it, I am NOT a macho man. I say this because a few years back, I had the honor to be introduced to Richard Herd by my friends Charles and Adina at a convention in New Jersey where we were costumed as characters from the 80s TV show ‘V’. He was such an engaging personality! But most of all, when the crowds were thin, he was welcoming and conversant. Not “Hollywood” in the slightest. The four of us talked for a good couple hours of so many subjects from his large body of work.

A year later, our group had the pleasure of having him dine with us after another convention, this time at Foxwoods. This wasn’t a regular dinner! This became a FAMILY DINNER! The lovely Greta Blackburn was in attendance as was Frank Ashmore, with Richard Herd sitting next to me 😳. Conversation, stories, music, and jokes, saw us all through the meal that night.

That feeling of family was cemented for many of us, because those we had come to see, were just as happy to be with us as we were with them. Our NEW extended family.

Richard and I had our stories and banter exchanged a few times as the night went on, and I let the crazy slip out more than once. I remember him asking me with a smirk on his face, “What color is the sky in your world?” as he laughed…

Today, Richard, it’s not so much the color, as much as the light having dimmed that bit for you no longer being on it… Thank you for the light you brought to our lives.” – Erik L.

“At ComiConn 2017 we planned a big dinner for all of us CT:Vers and the celebs(Frank Ashmore, Greta Blackburn, and Richard….Marc Singer was invited, but declined to attend)
We were staying in the Fox Towers near the con center, and the steakhouse was on the other end of the casino complex, a 10-15 minute walk away. Most of the group headed to the steakhouse, and I hung back to herd the stragglers.

As they finally all gathered at the base of the elevators and we start to head out, I spy Mr. Herd heading the wrong way! I call out to him, “Mr. Herd, I believe you’re with us!” and his face lights up in recognition (probably because we’re wearing our CT:V gear). He proceeds to talk our ears off for the entire trip down to the steakhouse, asking us how our con is going, and regaling us with stories. It literally felt like I was walking with my grandfather. At one point we ran into Felix Silla (Twiki from Buck Rogers and also Cousin Itt), and he stopped and made a couple of short jokes with him!

Once we got to the steakhouse, he announced ” Your Supreme Commander is here!” I swear I had a bigger grin than the Joker! R.I.P. Mr Herd, you were one in a million!!!” – Dave S.

Find the original thread with more tributes in the comments here.