We recently reached out to Jeff out of the blue, just to tell him how much we love his work, not knowing whether we’d get a response or not. He wrote back, thanked us and reminded us that he went to the Yale School of Drama and loved the area.

After a few months of chit-chat, we asked him if he’d consider doing a group signing for members of Visitor Fleet, which we told him would be personalized for members, not to be resold anywhere, and that we’d make it as easy and convenient for him as possible. He responded, “Sounds great! Let’s do it!”

So, we made our own Visitor Fleet-style prints, collected the money, and sent the packet off to him along with a couple of gifts (our usual personalized mug as well as a V/Visitor Fleet t-shirt). He texted us when he got the package and said he’d get to them after the holidays. We asked him if he liked “the goodies”, to which he replied, “GOODIES?  There are goodies? Let me grab the box out of my office.” The next text we got (while we were at Charles’ office holiday lunch) said, “HEY YOU GUYS!” and commented how he thought the box looked a little big for just photos, thanked us for the gifts, and told us how much he appreciated the thoughtfulness. We were grinning ear-to-ear for the rest of the day after that.

Later, when the autographed photos arrived, HE threw in some extra stuff for US! Just like everyone else we’ve had the pleasure of meeting from the show, Jeff is nothing but sweet and gracious. 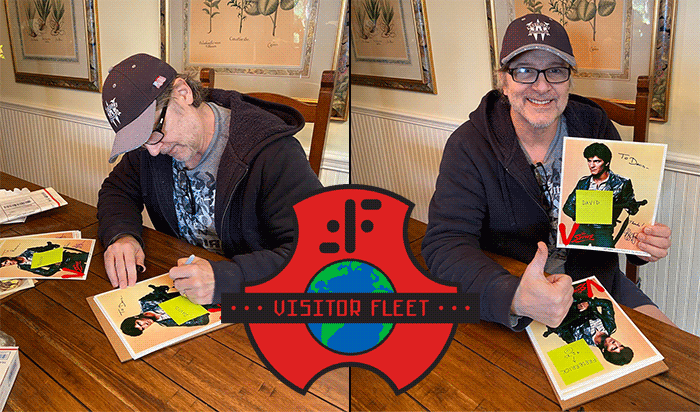